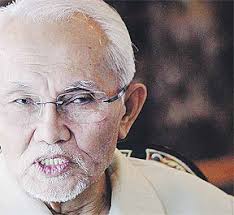 KUCHING – Sarawak Chief Minister Abdul Taib Mahmud is confident that the state Barisan Nasional (BN) will win with a “comfortable majority” in the upcoming state election.

However, when asked by reporters to quantify it, Taib, who is also state BN chairman, said, “Count the Bumiputera-majority seats.
“With the people’s support, I believe we will have quite a comfortable majority, but I will be very sad if we form the next government without strong Chinese representation,” he said at an Aidilfitri celebration, here, Thursday.
.
More than 3,000 people, largely Chinese, attended the gathering and his address was translated into Mandarin.

The Aidilfitri gathering was held at a hotel in conjunction with the opening of a new RM61.5 million dual carriageway from Stutong to the Sama Jaya Industrial Zone and Kuching International Airport.

When asked by reporters if the Chinese would reject the Sarawak United People’s Party (SUPP), one of the state BN component parties, in the coming state election, Taib said: “I don’t know. It’s up to the Chinese to decide.”

There are 71 seats in the state legislative assembly, out of which 56 are Bumiputera-majority seats and the other 15, Chinese-majority.

Taib appealed to the Chinese community to have a strong representation in the government to have a greater say.

He urged the Chinese to think deeply over what would happen in future if they have no representatives in the government.