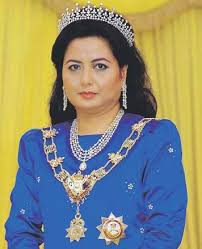 Almost three weeks after the Bersih 2.0 rally, the debate continues unabated with a key member of royal family claiming today that the electoral reform movement “had in some way been hijacked” by other groups and individuals.

Johor Sultanah Raja Zarith Sofia Sultan Idris Shah, said though the original cause of Bersih rally was genuine, the movement had been taken over by others.

She was fielding a question from a student after officiating the 5th Annual Malaysian Student Leaders Summit at the Kuala Lumpur Hilton this morning.

Raja Zarith Sofia, who is also the chancellor of Universiti Teknologi Malaysia, advised the students against completely believing in media reports on the Bersih rally.

Instead, she said they should decide on their own on what is right or wrong and try to grasp as much as they can on current events in the country.

“Of course, you can see from the mainstream media that perhaps Bersih is founded by wrong people and the bad guys, and other groups are the good guys.

“It maybe or may not be, there is no right or wrong answer, but it may indicate that the country is heading for some kind of maturity.”

She also said the Bersih rally organisers may have been influenced by the Arab Spring in the Middle East but claimed that the scenarios are different between the two events.

“We must realise that in Middle East, what they were reacting – especially in Egypt – was against the rule of one person,” she said, referring to the Egypt’s former president, Hosni Mubarak.

“The fact that there was so much poverty and they don’t really have a big middle class like we do.”

‘Get rid of vernacular schools’

To another question on the nation’s education system, the Johor sultanah commented that Malaysia should abolish the vernacular school system.

This, she explained, is because Chinese and Tamil school students do not possess a good command of the English language to communicate with foreigners.

“Ideally, ridding vernacular schools would be a very forward-looking move,” she said, adding that this was her personal view.

Earlier in her speech, she said she has noticed that mainstream media reports, as well as responses of readers of blogs and news portals, have become worryingly provocative.

“It is quite apparent that we need to communicate more with each other in order to avoid conflict, whoever and wherever we are, and perhaps one of the best ways is through dialogue.” – Mkini

This entry was posted in Bersih, Pakatan Rakyat. Bookmark the permalink.