Rosmah and the Ring of Fire

Women who have a penchant for jewelry would probably envy the gargantuan diamond ring linked to Malaysian First Lady Rosmah Mansor, which has ironically turned into a ring of fire for her, with angry citizens condemning such alleged extravagance while they struggled with their daily lives living in a country of escalating costs and diminishing welfare subsidies.

60-year Rosmah cuts a controversial figure as far as the people are concerned. Most Malaysians have the impression that she wants to outshine her husband and tries to have the country ruled her way.

People who earned less than RM2,000 a month, who include clerks, hairdressers, waitresses and the blue-collar workers, cannot comprehend why a woman would need such a heavy ‘stone’ to decorate her finger.

“Is it heavy?” Salina, a waitress from the Seratok area, wondered aloud as she looks in awe at a picture of the ring that has appeared in numerous scandal sheets across the nation. But whatever its weight, valued at RM24.4million, the diamond could certainly feed several dozen longhouses for a year at least.

Not being well-versed in worldly ways, Salina could not understand why a woman would need to buy such an expensive item when she could buy a whole lot of other gold jewelry with that amount of money.

For her, coming to the city to work and sending RM300 a month back to her ageing parents is already a big deal, so it is tough for her to grasp how much RM24.4 million actually means.

The more she explains, the murkier it gets 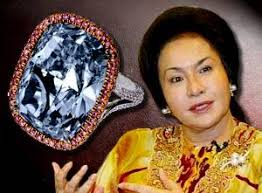 Jessie Lim, a supplier, felt that Rosmah should not have to deny or try to explain about the ring’s existence anymore. “It’s like the Chinese saying, the more you explain, the murkier it becomes.”

To Jessie, Prime Minister Najib Razak’s wife is becoming more and more like Imelda Marcos, Grace Mugabe, Laila Trabelsi and the notorious Queen of France, Marie Antoinette who once asked her subjects to eat cake when there was already no more bread left in the country.

“It’s like living in a fantasy world and keeping up with the Joneses,” ventured Jessie.

She opined that women of leisure tended not to have a clear understanding of what life is all about and many of the world’s greatest female megalomaniacs had actually come from humble backgrounds.

“The first thing she should do is to let herself age gracefully, let the wrinkles come out naturally and be glad of them. We are all going down that road of old age. She musn’t fear that or try and rely on jewellery to disguise that she too is human.”

Sarawak state assemblywoman Violet Yong said even if she strikes jackpot, she would not get a ring like that. “What’s so beautiful about a stone? To me, it is a waste when the people are so poor and in need of infrastructure, more hospitals, schools, roads,” said the workaholic Violet.

It must be pointed out that Rosmah has dismissed allegations the ring was hers and warned that such talk was slander. Violet too slammed the hoopla that has accompanied the tale of the ring purportedly bought from New York socialite jeweller Jacob & Co in April this year.

“After three weeks of silence, she finally denies and talks about wanting to give education to the children. Rosmah should come to Sarawak, to the rural areas and see the kids of the interior who do not even get to go to school and are always hungry for food,” said Violet.

“Bread and butter issues are more important to these rural folk than even sending their children to school, so why not walk the talk. Explanations will not help them, only equitable and consistent policies can.”

Indeed, whether the ring is really hers or not, Rosmah could be more sensitive to everyday Malaysians.

The fact is despite Malaysia’s relative prosperity, there is still hard core poverty. People living even in urban towns face flash floods, shortage of medical care, congested hospital and the like. The amount of money the ring purportedly costs can obviously be used to do much good.

Pushy and the Meek 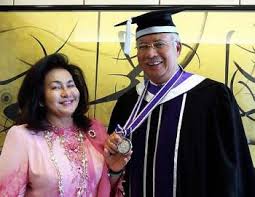 A retired government servant who studied psychology in her early days said whenever the PM and his wife were attending public functions together, it was easy even for a layman to read that she was bossy and her husband was the meek one.

“She has a strong character and the PM must be a nice man to allow her to have her ways, almost in everything. Even when he claimed that he has to cut short their recent holidays, he had to thank her publicly for doing so. But why should he? The country is not run by her,” said the retiree.

Jimmy, who runs a small bakery with his wife, said when customers came into his shop and talked about Rosmah’s ring it reminded him of a Johnny Cash song, “Ring of fire”. 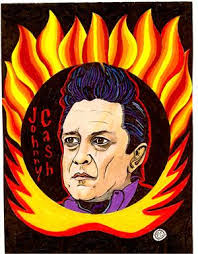 Yet, having nothing against Rosmah, Jimmy said he felt only sympathy for her.

“It is a lesson to be learned that when you are the wife of a PM, you should know your place and know how your people are suffering. You know why? Because as the PM’s wife, you are automatically in the Ring of Fire.”

Maybe, Jimmy is right and Rosmah can glean some wisdom from the lyrics of the Johnny Cash song after all. – Malaysia Chronicle

This entry was posted in Najib Abdul Razak, Rosmah Mansor. Bookmark the permalink.
%d bloggers like this: