Unless a DPM is given for them (and the current DPM was agreeable to this during the Upko congress where it was voiced out by Tan Sri Bernard Dompok) the two states will continue to suffer and lose. Now, I wonder if Mahathir’s opinion in the matter is of any relevance at all. Why do reporters still think his remarks have so much value? 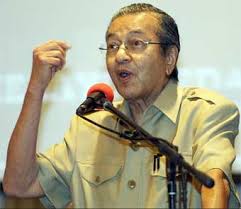 LETTER I have for a long time thought of Mahathir as a former great man who had lost some of his sense of balance, after reading his many irritating comments about a lot of issues. We notice that of all the many former chief executives of nations anywhere in the world, he has gone on record as the most the most acidic and the most sarcastic.

Tun Mahathir has been so aggressive in his criticism of the West and the Jews that he has been called “The Last Mohican of Asia,” but he is also a kind of warrior whose war is not yet finished, so he is still on a rampage to bulldoze everything he thinks is against his beliefs. Humility and moderation are very far away from his mind, thanks to the 21 years of wielding power. And now in active ‘retirement’ he feels he is free to say whatever he wants, even at the embarrassment and expense of the current Prime Minister. But a long period in a powerful post doesn’t make one right in everything. In fact arrogance often sets in and can make one make a lot of mistakes, even delusional.

The irritation you get from this wild and arrogant ranting simply gives you nausea, and make you want to puke out of pure disbelief. Firstly, the second deputy PM post is not asked for by Upko for somebody in Upko, but for someone from Sabah or Sarawak. So saying other BN components also want the same thing is taking it totally out of context out of sheer sarcasm. And then saying “Whether you’re deputy (prime minister) or not, if you can serve the people, that’s fine” is saying you can serve the people the same way whether you are an Assistant Minister or a Deputy Prime Minister.

And how did he come up with the silly idea that Kedah wants to have a DPM as well? How come he equates Sabah and Sarawak to Kedah, a small state in the Peninsular which itself is smaller than Sarawak? Doesn’t he see the logic in having a DPM for the Borneo states knowing the huge size of the area and its 2,000-mile distance from KL, and having hugely different historical and cultural backgrounds? Perhaps he just can’t admit that the two states have suffered half a century of economic discrimination, and even neglect in many aspects.

Unless a DPM is given for them (and the current DPM was agreeable to this during the Upko congress where it was voiced out by Tan Sri Bernard Dompok) the two states will continue to suffer and lose. Now, I wonder if Mahathir’s opinion in the matter is of any relevance at all. Why do reporters still think his remarks have so much value?

And as to the grossly crude remark “If you don’t serve the people, you’ll suffer the fate of Gaddafi,” I would like to ask Mahathir if what he meant was some leaders in Malaysia should be shot dead for not doing their jobs? What about those who stole tens of millions from the national coffers through kickbacks? Should they be dragged in shame through the streets as well? I remember that at one time during the Libyan revolution Mahathir sympathized with Gaddafi, perhaps because in 2005 Mahathir received, in Tripoli, the Gaddafi International Prize for his human rights contributions.

In pointing to Gaddafi’s example for injustice and tyranny, at least Mahathir is showing a lot of rational thinking – wrong is wrong and right is right, regardless of who you were. History can’t be changed because in the end, truth always does prevail. And Mahathir, as a former leader of international status, should know more than anyone of us that reckless statements will not go unnoticed, and will always come back to you, and often you have to swallow them yourself. – Malaysia Today