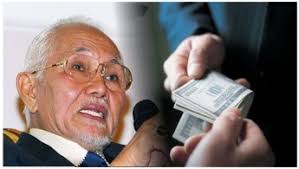 Kota Sentosa assemblyman Chong Chieng Jen hit a raw nerve in Taib when he stood up to raise a point of order, interjecting Taib’s winding-up speech during the final day sitting of the state assembly.

Chong wanted to know from Taib himself the number of contracts given to Abu Bekir’s company.

A visibly angry Taib challenged Chong to repeat the allegation outside the house.

Chong, who has been exposing irregularities in the awarding of contracts by the state government, accepted the challenge.

At a press conference later, Chong repeated what he said in the state assembly.

He said Titanium Project Management had been awarded construction of a few hundred bridges worth RM1,178,410,000 without open tender.

The five-year contract for the bridges was awarded in 2008.

In 2001, the government awarded the construction of 384 bridges to Titanium Management Sdn Bhd for RM500 million.

The company managed to complete 332 bridges or 80 percent of the job, but over the years the cost had spiralled.

According to Chong, the government now has to pay the company RM948 million.

He reiterated that Titanium Management belonged to Abu Bekir.

Chong had submitted questions on the awarding of the government contracts to Titanium Project Management, but Speaker Awang Asfia Nassar had rejected them.

That part of Wong’s speech was expunged from the Hansard when he spoke during the debate on the state budget last week on the subject of businesses owned by Taib’s four children.

When Wong sought clarification from Asfia as to why that part of his speech was expunged, a heated argument ensued resulting in the speaker giving Wong the marching order.

Wong was advised to give a notice of motion to the Dewan if he wanted to raise a point of order regarding the matter.

Wong then submitted the notice early on Wednesday morning and was heard in the afternoon after the chief minister had concluded his winding-up speech.

During the debate on Nov 18, Wong had said that a company named Shoreline Development Sdn Bhd had been alienated parcels of state land situated at Tanjung Lobang in Miri.

He said about 90 acres or 36.44 hectares had been allocated to Shoreline Development at a cheap price of RM2.63 million.

It was also at this point that Wong detailed the shareholding of Daya Syukra Sdn Bhd.

His motion to reinstate the expunged part into the Hansard was rejected.

This entry was posted in Corruption, DAP Updates, Sarawak Legislative Assembly, Taib Mahmud aka The Termite. Bookmark the permalink.

1 Response to DAP riles angry Taib with questions on contracts