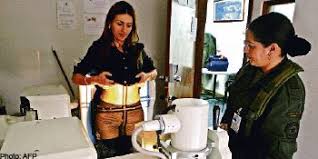 KUCHING: Bidayuh women have been warned to beware of syndicates out to dupe local women into carrying drugs overseas.

He said a rising number of foreign drug traffickers were using the Internet as a tool to recruit or trick Malaysian women, including Bidayuh women, to get drugs into other countries.

Specifically, he alleged that most of the women met African men online and later agreed to carry packages in their bags, but what they did not know was that the packages contained illegal substances such as cannabis and heroin.

Dawos, who is Mambong MP, said two Bidayuh women unwittingly became drug mules for their Nigerian boyfriends. Both were arrested in Australia. One of them is from Kampung Seratau and another from Kampung Annah Rais, both within Mambong constituency.

“Bidayuh parents who have daughters better monitor their social activities. If you can, prevent them from going with Africans, especially Nigerians,” he said at a function organised by the Biperoh Association here yesterday.

“Make sure that your young daughters are not easily manipulated or tricked into transporting drugs, especially when money and relationships are involved.

“Also know what your sons are doing; where they work or who they follow looking for jobs in Peninsular Malaysia because they too can be tricked into becoming drug mules,” he said.

Dawos said four Bidayuh men had fallen victims to a drug syndicate in Peninsular Malaysia. They were forced to smuggle drugs from Thailand into Singapore.

He said one of the victims had died from swallowing too much of the drug capsules.

He said the four men were initially offered jobs with attractive wages at a factory in the peninsula, but later forced to traffick drugs as soon as they arrived in Kuala Lumpur. – The Star