Suicide is against the teachings of Islam, says Dr Mahathir

There are many who worship Mahathir and there are also those who loath him. For me, I worship no political leader but I have to say here that at times, Mahathir does talk sense. This is one such time. – fs 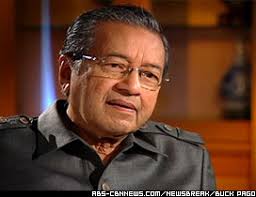 Thus, said the former prime minister, it was tragic that there were Malays who were willing to go against the religion by committing suicide supposedly in the name of jihad.

“The same group of people also resorted to killing their fellow Muslims, who had different political allegiances or ideological beliefs.

“Among the victims of militants’ suicide bombings were children and even the disabled. Most of the victims were women and not armed soldiers,” he said in his blog (chedet.cc) yesterday.

Dr Mahathir said no ulama or Muslim scho­lars had ever issued a fatwa permitting such senseless acts of violence.

“I have tried to search the Quran for teachings that permit Muslims to commit suicide or kill other Muslims but there is none,” he said.

He said those killed did not attack Malaysia or its people and the country was never in danger of being attacked by others who are not aligned to us.

Dr Mahathir reminded the so-called jiha­dists that the Quran taught Muslims to appease other Muslims who were in conflict.

“If there is a party that rejects peace, then a third party is allowed to support the one who choses peace. But there is no teaching that tells us to increase the animosity between them by taking sides.

“Allah never liked those who caused chaos and havoc,” he said, adding he had never come across any hadith that condoned Muslims fighting each other.

“There’s certainly not one that says a Muslim will be considered a martyr if he killed himself so as to kill other Muslims,” Dr Mahathir said.

“I am curious to know the opinion of ulama in Malaysia regarding heaven that is said to await those who die as Muslim fighters.” – Star online