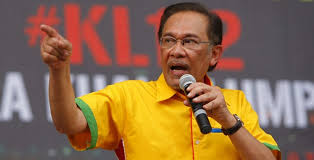 KOTA KINABALU, Jan 30 — Opposition Leader Datuk Seri Anwar Ibrahim said today he has “resigned” himself to spending his old age in jail for sodomy again, claiming that the top court’s decision will likely be politically influenced.

The 67-year-old Permatang Pauh MP is appealing against a five-year jail sentence from the Court of Appeal and will know the outcome from the Federal Court on February 10.

“I deserve to be acquitted, but I will continue with the struggle. It is not easy for me, Azizah and my family with my age and condition, but it is a political decision, not based on legal evidence. Nobody can dispute that, not the international legal fraternity,” Anwar said after a dialogue session with a group of youths here.

“I am resigned to accepting whatever the outcome. I will not negotiate or compromise my principles, or accept any ultimatum with the threat of imprisonment. Based on evidence or facts, there is nothing to implicate me committing the offence,” he added.

The PKR de facto chief, who was once convicted and jailed for six years on corruption and sodomy charges after being sacked from government in the late 1990s, also said he was not cowed by the prospects of going back to prison.
“I will still continue the struggle. Or else I would cancel this meeting, but it was pre-arranged. I will still go ahead and continue to visit as many states as possible.“I shouldn’t worry about the decision. I will face it with a lot of patience,” he said.
Anwar is accused of sodomising a former personal assistant, Mohd Saiful Bukhari Azlan, at an upscale Bukit Damansara condominium on June 26, 2008.He was acquitted by the High Court in 2012 after a marathon trial that lasted nearly four years, but the decision was later overturned by the Court of Appeal, which sentenced Anwar to a five-year jail term.Also at stake for the Penang-born is his federal seat as the law bars anyone fined RM2,000 or imprisoned for more than one year from serving as a lawmaker. – Malay Mail Online