Nazri: Why almost faint? I’d die if I saw RM4b in Najib’s account 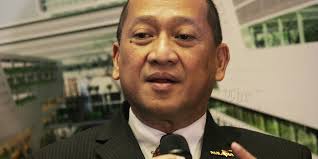 Umno minister Mohamed Nazri Abdul Aziz said he would have died on the spot instead of just “almost faint” if he had seen RM4 billion in Prime Minister Najib Abdul Razak’s private bank account.

He said this when he took a swipe at former deputy prime minister Muhyiddin Yassin, who claimed last week that he almost fainted when he was showed the amount in Najib’s account.

“Why didn’t he faint then, why (merely almost) fainted? He should have fainted if it is true,” he quipped.

“But the fact is it is not true, that’s why he didn’t faint,” he said at a press conference before the launching of a book.

“If I had seen RM4 billion, I would not only have fainted, I would have ‘mati terus’ (died on the spot),” he said.

“I know (Datuk Seri) Najib. He is not the kind of person who (would) steal money. Let me tell you, all right?” added Nazri, who is tourism and culture minister.

Muhyiddin had claimed that close to RM1 billion was already in Najib’s personal bank account even before the widely reported RM2.6 billion donation came in.

He said he learnt about the deposits prior to the purported ‘Arab donation’ from then attorney-general Abdul Gani Patail, who had shared the information with him

Muhyiddin, who is also the Parti Pribumi Bersatu Malaysia (Bersatu) pro tem president, alleged that about RM4 billion was in Najib’s account.

Meanwhile, Nazri declined to comment on the criticism of Bersatu pro tem committee member Syed Saddiq Syed Abdul Rahmah, who urged Umno leaders to stop being hypocritical when criticising others.

Nazri dismissed Syed Saddiq as not important for him to comment.

“He’s a little boy, I don’t know him, lah. Not important. (If) you want me to comment, (he or she should) be a real politician – someone who has been elected by the people.

“If he (real politician) talks, I will respond but anybody else is not important to me,” he said, urging Syed Saddiq to stand in the general election.

Syed Saddiq had slammed Umno for not upholding the constitutional monarchy system when the government gazetted National Security Council Act without royal approval, while Dr Mahathir Mohamad was criticed for stating his view on ‘Bangsa Johor’.

Syed Saddiq also asked why Umno kept silent when Nazri warned the crown prince of Johor that he would be “whacked” if he meddled in politics. – Malaysiakini

This entry was posted in Muhyiddin Yassin, Najib Abdul Razak, UMNO. Bookmark the permalink.
%d bloggers like this: