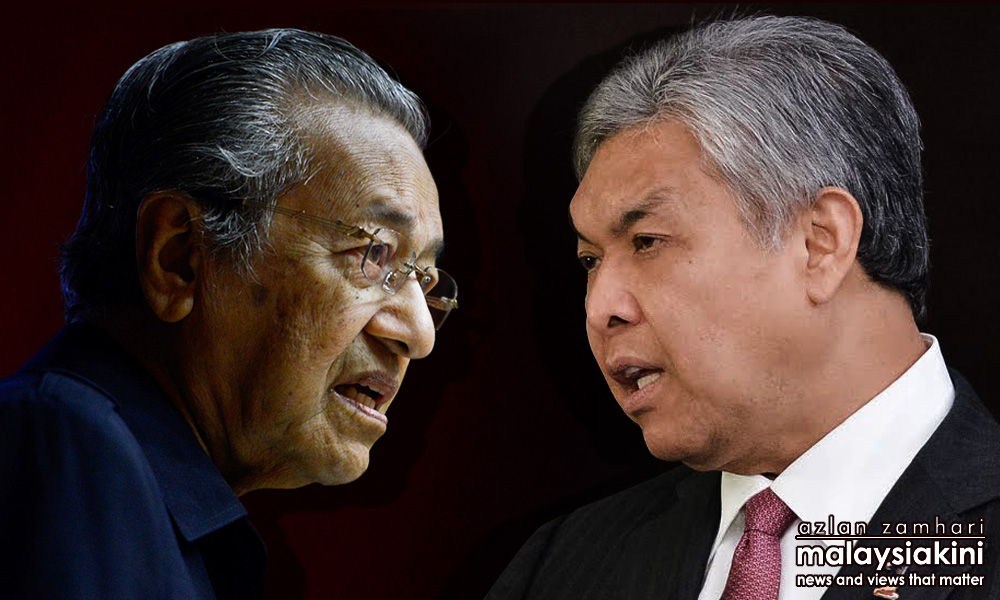 YOURSAY | ‘Zahid wouldn’t lie, would he? He accumulated his wealth when he was in corporate sector.’

I am free of corruption, declares Zahid

Anonymous 2436471476414726: The standard pleading for all those charged in court for corruption is that they are not guilty. Only after a trial, some would be convicted and sentenced accordingly.

Thus, it is no big deal if someone says he is free of corruption. It is for others, or the appropriate authority, to judge and not oneself. Even a murderer will say he is innocent until proved otherwise.

In DPM Ahmad Zahid Hamidi’s case, allegedly having RM230 million in his bank account seems a lot of money, even if he was a corporate figure.

The Income Tax Department (LHDN) must investigate this to ensure Zahid had declared the correct income and paid the taxes due. Over to you, LHDN.

Mahsuri: The Home Ministry is responsible for licensing money lenders, yet it’s an open secret that even authorised money lenders are lending beyond legally imposed maximum lending rates. Till today, no action has been taken against such blatant breach of the Moneylenders Act.

Who can forget which minister it was who went all the way to Bangladesh to secure the import of hundreds of thousands of Bangladeshis to Malaysia as foreign labourers?

Conveniently, all processing of these migrant workers will be handled by some newly-formed private company, which is probably linked in some way to the same minister (who has no role in the planning of labour issues in Malaysia, by the way).

And Zahid thinks he can just publicly declare himself and his ministry free of corruption and that settles it?

But of course, this is the same minister who has publicly encouraged all Muslims and the National Registration Department (NRD) to ignore a Court of Appeal’s decision in favour of a fatwa that has absolutely no legal standing.

Anonymous 2465861491622056: Just ask any legal or illegal foreign worker in Malaysia and he will tell you the amount of money he has to pay enforcement agencies under the Home Ministry on many occasions. Zahid, we know you are talking rubbish.

Slumdog: So, it must be true then, because Zahid said so – that he is free of corruption. Zahid wouldn’t lie, would he?

He accumulated his wealth from the time he was in the corporate sector. That explains it. It’s the same man who said he met with representatives of the Saudi royal family when they donated RM2.6 billion to Najib.

Spinnot: They can claim to be “free of corruption” only because they have not been investigated by a truly independent anti-corruption agency.

I believe a large number of politicians and civil servants would be in jail for corrupt practices if they are so investigated.

I possess recording of talks with Dr M, says Zahid

Hi Perception: It’s no secret to anybody that former PM Dr Mahathir Mohamad wants to topple PM Najib Razak. He has publicly said so.

If someone meets a person for a friendly chat, you don’t come along with a tape recorder. You do so only when you talk really serious business.

Whether the public believe the story will only be known at the ballot box. However, what is worrying for Zahid and his supporters is whether the top man in the party believes what he said.

Cmfoo: Why was Zahid, newly-minted as DPM, even there to see Dr M if not for some ulterior motive?

Dr M had already resigned from Umno and was railing against the Najib kleptocracy. A hundred recordings will not erase the fact that Zahid sought out Dr M. Why, if not to hatch some sinister plot?

Sarawakian: Zahid, this reeks of desperation and damage control. Your statement is totally illogical:

1) Would Dr M allow himself to be recorded, especially when you haven’t explained the purpose of the recording?

2) What is the purpose of the recording when Dr M has made his intention to topple Najib by any means clear from day one to anybody willing to listen?

3) Why would Najib send you to make peace between himself and Dr M when you are the person with most to gain from a fallout?

Your statement only confirms Dr M’s allegation that a meeting indeed took place. And we can also then assume that what Dr M said about the RM230 million in your account is true.

Odin Tajué: Zahid, you asked Mahathir not to lie? That’s rich, considering you haven’t exactly been known as a square shooter. Take, for instance, your claim of having met the supposed donor of the ‘do-nay-shun’ of US$681 million to Najib.

Next point, when you make a private visit to someone and you tape-record — presumably secretly — your conversation with the person, then it shows you have a dubious character. Not that you have exactly been known as a paragon of honesty, of course.

But whatever, how about sending a copy of your tape to Malaysiakini? We all would love to hear who said what. Can do?

Vijay47: Zahid, you are the DPM of Malaysia, second only to Najib who, of course, has his own unique claim to international fame. Thus, you have your reputation and Malaysia’s image to protect.

Responding to Mahathir’s recent comments, you state that it was he who suggested a “no confidence” rebellion against the prime minister. My humble question – so what?

Was Mahathir’s proposal illegal? He in fact was advocating a parliamentary procedure, he was not urging you to do a Lahad Datu. So where is the offence?

By the way, I think that in your excitement you forgot to comment on another issue that Mahathir had spoken about. I believe he said that even years ago, you were allegedly dancing around with RM230 million in your pocket. Perhaps you would care to explain that?

I am confident that you will soon be suing Mahathir for slander. If you wish, I could suggest a certain lawyer for you to engage. But his fees are rather steep. RM9.5 million. Kacang puteh to you?

Aries46: As it stands, Zahid is said to have allegedly amassed a whopping RM230 million in his asset declaration to the former PM in 1996, and said to be seeking the latter’s help to remove Najib and take over the premiership.

Zahid’s claim that he had taped the conversation is irrelevant unless he can release it as proof that Mahathir is not telling the truth. If not, what good is the recording and why bring it up?

And all the more, Mahathir stands vindicated. The ball is still in Zahid’s court regardless of the token half-hearted noise coming from the regular supreme council hot air blowers.

Spinnot: Mahathir-Zahid meeting took place in mid-August 2015, more than a year after Mahathir had fallen out with Najib. Mahathir and his wife even attended Bersih 4 rally at the end of August in that year.

The above is a selection of comments posted by Malaysiakini subscribers. Only paying subscribers can post comments. Over the past one year, Malaysiakinians have posted over 100,000 comments. Join the Malaysiakini community and help set the news agenda. Subscribe now.

These comments are compiled to reflect the views of Malaysiakini subscribers on matters of public interest. Malaysiakini does not intend to represent these views as fact.

This entry was posted in Dr Mahathir Mohamad, MoCS (Sarawak). Bookmark the permalink.
%d bloggers like this: