COMMENT | Dr Mahathir Mohamad is right. National schools had become “religious schools” and many must be glad that the prime minister intends to correct the situation.

Mahathir certainly hit the right note, as many groups had expressed concerns on this ‘religious’ overindulgence in the current school syllabus.

Speaking at a dinner for Sultan Abdul Hamid College alumni members in Kuala Lumpur on Friday, the prime minister said that “someone changed the curriculum in the school, and now the national school has become a religious school.

“They are all learning about the religion of Islam and not learning anything else. And as a result, the graduates or the people who are passing in the school are not very conversant in things that are useful for them to get jobs, but they are very good ulama,” he said.

Two things are interesting to note in this part of the prime minister’s speech.

One, Mahathir mentioned that “someone” changed the curriculum. Apparently, the prime minister did not agree with the “someone” whom he did not name.

Call that his trademark flair if you will. Mahathir does have the habit of not naming those he criticises publicly, unless he finds it absolutely necessary to do so.

What must be asked is whether that “someone” was the education minister during Mahathir’s first tenure as prime minister.

It would not be way off to conclude that that surely could not have taken place during that time, for Mahathir would not have allowed it. Then again, you never know.

However, if the curriculum was indeed changed then, Mahathir should be held equally responsible for what he now concedes is not right.

As I Googled for the list of education ministers over the years, I chanced upon this letter published in Malaysiakini in 2002. This missive, written 16 years ago, was able to shed some light on what has actually gone wrong with the curriculum in national schools today.

The writer starts by posing one important question which is still being asked today: “How can Malaysia produce competent graduates when we have such a fickle education system that changes with the whims and fancies of whoever is appointed education minister?”

“Consider all the changes, political and otherwise, that our politician-education ministers have willed according to their own agenda” and he listed the policy changes made by previous education ministers, including Mahathir himself, Anwar Ibrahim, Najib Abdul Razak and Musa Mohamad.

Of particular interest in the context of this article is the writer’s take on Anwar “who in 1988 as education minister decided that Bahasa Malaysia which followed the Johor-Riau pronunciation was not ‘nationalistic’ enough, and ordered it to be replaced by Bahasa Baku (standard phonetic Malay).

“It was also during his time that religious studies were given priority and students were made to take the subject,” he wrote.

Did we hit the bullseye here?

Mahathir, as the prime minister, must have given space to his cabinet members to define policies as they thought best in their respective ministries.

After all, he was also a former education minister. The letter writer said that “Mahathir emulated Abdul Razak Hussein in his nationalistic fervour and went one step further by ordering a change in the medium of instruction for all subjects from English to Malay.” Wrong move by Mahathir too.

This was in the 1970s, and on Friday, Mahathir went back on his previous stance by declaring that “it does not make us less Malaysian to master the English language, but it is something we should be proud of.”

There is not much point in lamenting on the flaws of our education system in the past. Although some academicians have argued that education policies must be constantly evolving, it is vital that we set some concrete proposals in place particularly those relating to language and religion.

So let’s dissect the second part of Mahathir’s speech on Friday – that learning religion alone will lead to difficulty in finding gainful employment.

Mahathir is right again. How many religious scholars do we really need in this country? 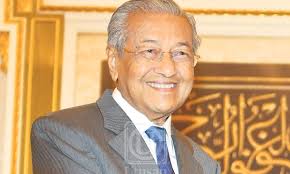 There is no doubt that learning religions is important and useful. It is even intellectually exciting because it provides access to the mystery of the other.

Religious studies also provide our students the opportunity to understand, with depth and nuance, the many beliefs and rituals that move persons to appreciate the alternative world of the religious reality. It’s good to learn about or even believe in the existence of a greater being.

But coming down to earth and reality, I think I must state clearly that the reality in our education system of the past is that moral studies has done a better job in shaping our students into sound, morally upright and responsible adults. There was no need for religious studies then.

Moral lessons in schools will do just fine in the promotion of the spiritual, social and cultural development of our students.

Lest we forget, we send our children to school because we know the importance of education and gaining knowledge to improve their lives and that of others too.

Whoever is the education minister must be clear about something. They must put their political and religious leanings aside when formulating education policies in future.

COMMENTS from Malaysiakini readers up to 5pm 23/Dec/2018

Firstly, Mr Siah must be commended again for writing about the crucial issues of the day for Malaysians. Secondly, two generations of Malaysian youth unlucky enough to be schooled in the National Type schools, as opposed to Chinese or International schools, have been shortchanged or as the Aussie saying goes: ‘Have not been given a fair-go’, and the political leaders and ministers responsible for this miscarriage of opportunity and Justice, AND WHO NOW CAN MAKE AMENDS, should do a ‘mea culpa’ and reverse this mean and destructive policy.

Why is it right only when Mahathir says it. The rest of us have pointed that out before but UMNO politicians have been using religion to keep control of the masses.

TDM please immediately replace Mazlee with Rafida Aziz, she is dynamic lady to bring changes in education system, to make Malaysian students competitive.  Looking at the MPs in PH, no none else in PH has capability and braveness to bring changes in education systems. Look back what happened to our education system from 1970 till now. Our system not gone down from poor to worst but gone into drains and washed away. I went to clinic to see doctor for consultation, he is Malay doctor, nice guy. The problem is he did not understand well English, for my questions he answered in Bahasa or in broken English. Sad to think, what will happen if a foreigner gone medical consultation. We appreciate TDM’s statement about our education system, hope his statements come into reality. Oh God, save our Malaysian future generation with good and effective education system so that they will compete universally without fear.

We have had imbeciles as education minister.  The present one is the worst! But I think it was done on purpose to retard the intellectual development of the people in order to facilitate kleptocracy and control of the rakyat.

Someone please tell Black Shoe Dakwah Minister to keep religion and politics out of our schools and universities.  He is all over the place.

Of course we all know who the culprit is. Why is this skunk allowed back into the government. He will continue to create more and more problems for the country

FRANCIS PAUL SIAH heads the Movement for Change, Sarawak (MoCS) well captured & narrated…………. The 3-R years back was a big disaster….. My family did employed some staff from that era & felt pity for the young gal….. She is totally lost thus, he future is gone.!!!!!!!! Just 3 weeks back, I got a hardworking Malay staff but failed miserably in his written English to an extent no single person understand what his were trying to tell!!!!!!!!! His own race who is older in age also belittled him……. Moral of the sharing is an EDUCATION MINISTER can really messed up young aspiring students who could be our future leaders of the nation………. but instead will turn them into loafers & people that are lost in the system & a BIG BURDEN to the nation……….. In short, Maszlee the Education Minister is doing more harm than good and Maszlee definitely MUST GO…………. He is a liability to PH government……… Replace Maszlee before it is too late…………….

Thanks to Malaysia Baru that Francis can speak candidly on this subject. Who knows what would happened had you tried to write the same during the height of Lallang Operation. This subject is probably on everybody’s lip, how our education system changed according to the whims and fancies of every new Education Minister and as a result at the expense of the academic excellence of our students who became the guinea pigs with each new experiment. The loss in proficiency in English among them is probably one such tragedy that affected our ability to compete in the national and global arena. I have  Sarawakian friends who used tell me about how doctors from Kelantan, when posted to serve in hospitals in Sarawak, seemed so lost and unable to adapt themselves to the different Sarawakians culture/religions and who spoke more in English. These young doctors were so inward looking, very miserable and unable to interact with their Sarawak collegues. Today the majority of government servants do not speak English. They would get angry when you speak English to them not because they do not like you but because they just could not articulate themselves in the language. People get angry to hide their deficiency.