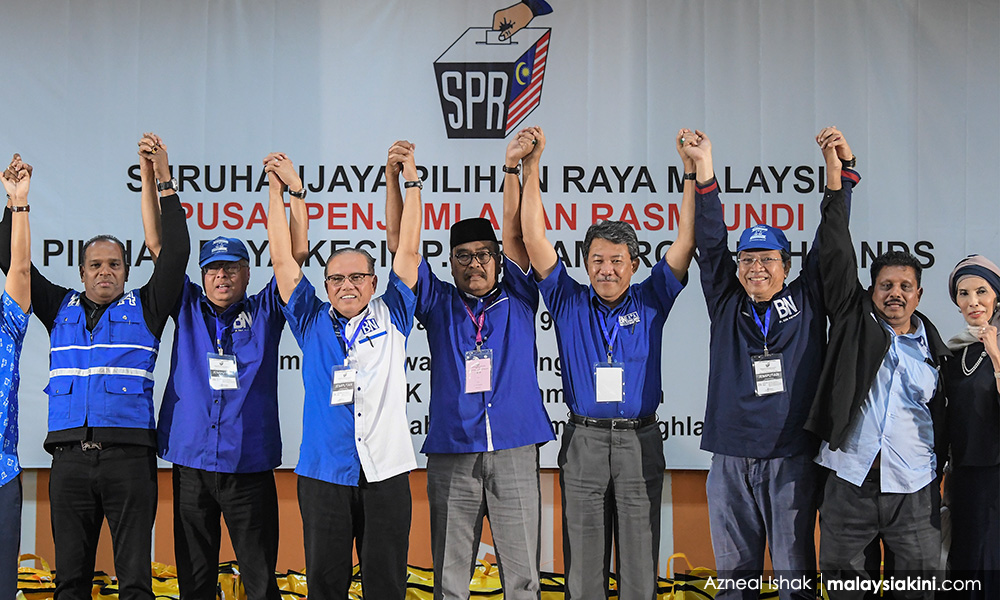 COMMENT Three days ago on Jan 23, I shared my thoughts on the Cameron Highlands by-election with some friends, penning this message: “I hope BN wins. Why?

“I always look at the candidates, not the party. BN’s Ramli Mohd Nor is a fresh face, a tough ex-cop, not entangled in dirty party politics. He will be a welcome change in Parliament.

“DAP’s M Manogaran might be a known fighting cock, but a tired, same-old, same-old face in Parliament. He is a former Teluk Intan MP.

“If I am a voter in Cameron Highlands, my vote would go to Ramli also because I think Pakatan Harapan could do with a little jolt. A government in power must not be invincible.

“Whoever wins, the people of Cameron Highlands will get the development and government assistance as promised. So they should be well taken care of. Now, they must vote wisely.

“Then again, I’m only giving my views from afar. I do not know the candidates personally. Nor am I familiar with Cameron Highlands, save for the tea I enjoy daily from there,” I concluded.

I was rooting for a BN victory because I would like to see a stronger opposition in the country. Another extra seat for the opposition BN probably means more than another one in the bag for the powerful Pakatan Harapan government.

Then again, Cameron Highlands was won by BN, via MIC’s Sivarraajh Chandran in the 14th general election.

So BN’s victory yesterday, in terms of numbers in Parliament, will not really make any difference to both sides.

But it does make a world of difference as a morale boost for BN as this is its first win in a by-election since GE14.

Several contributing factors are quite clear for this BN’s victory. Let me just pinpoint two.

BN’s choice of candidate was superb. Ramli is not a politician and not affiliated to any party. He is an independent candidate riding on the coalition platform. He is untainted and carries no ‘baggage’ commonly associated with its leaders from the past.

MIC made a wise decision by giving way to Umno to pick a candidate. Perhaps, it was a blessing in disguise that Sivarraajh was barred from contesting for five years by the Election Commission, otherwise he would surely have insisted on contesting the seat.

I’m also quite surprised by the MCA and MIC teams campaigning for BN, even with the Umno-PAS cooperation in full galore. No love lost despite the non-Malay BN components disagreeing with PAS on many fronts.

Perhaps, the choice of Ramli is the reason why MCA and MIC were able to set aside their fundamental differences with Umno, if only just for this by-election. Ramli is a local boy, an Orang Asli who calls Cameron Highlands home.

With the previous tainted Umno big-wigs, including president Ahmad Zahid Hamidi, out of the picture now, the new Umno under the leadership of deputy president Mohamad Hasan did very well in choosing the right candidate. Do we see better days ahead for Umno?

And surprise, surprise, even former premier Najib Abdul Razak was said to have made quite an impact with his endearing “Bossku” tag on the campaign trail.

The social-media savvy Najib is still a force to be reckoned with, say or think what you like about him.

The second most important factor leading to the BN victory is the level playing field now for the contesting parties.

With the new EC boss who ensures that no election offences are committed, the opposition is now able to campaign with more ease, match the ruling party and tackle its might and superiority head-on.

No Harapan ministers dared to break the rules. All eyes were on the lookout for any abuse of government machinery. Complaints to the EC on such matters were immediately attended to.

Even Prime Minister Dr Mahathir Mohamad had to charter a helicopter for the trip to Cameron Highlands on the last day of campaigning.

And Manogaran’s shirt blunder on polling day was also an issue. Well, an offence is an offence, no matter how minor it is. Kudos to the EC for a splendid job in Cameron Highlands.

As a Sarawakian, I hope the EC will also leave no stone unturned on this abuse of government machinery come the Sarawak elections which must be held by 2021.

I’m also glad that the by-election also saw the first electoral debate between the contesting candidates. It was telecast live on Astro Awani and RTM 1.

It’s a pity Ramli declined the invitation by Bersih to partake in the debate. Perhaps, a former cop is more comfortable with getting on the act rather than talking.

At the end of it all, the BN victory is probably a jolt Harapan badly needs. Never ever take the voters for granted.

In whatever leaders of government and politicians do, please bear this in mind: You are a servant of the people. The voters owe you nothing. You are paid by them to do a job. Stop politicking. Get down to it.

Congratulations Ramli and the Orang Asli community. At long last, you have one of your own, an Orang Asli MP.

Be proud, be very proud.

FRANCIS PAUL SIAH heads the Movement for Change, Sarawak (MoCS) abd can be reached at sirsiah@gmail.com